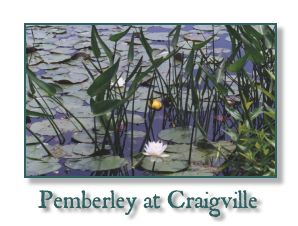 We began looking for a site and gathering names in the fall of 1997, not long after 18 of us had returned from our very first face to face meeting in Las Vegas. We settled on the Craigville Conference Center on Cape Cod, Massachusetts. It offered us a place where we could meet and live together for a weekend at a very attractive price and a very attractive setting.

By early spring we had our list of attendees (which would change some before the final event) and a pretty good idea of how we would get there and what we would do during the weekend. Jane very kindly took on the task of organizing transportation from Boston to the conference center and back. Two weeks before the event, she sent this email:

I'm almost done with the travel stuff. Women who don't know each other by face will be meeting at the airport or the train station, and then get picked up by yet another unrecognized face. It's like a spy thriller.

It wasn't quite a spy thriller. Scenes in the airport looked more like the one here. It was an interesting experience. Everyone arrived during what turned out to be the wettest week in Boston in 100 years. The airport seemed to be closed as often as it was open due to the heavy fog. Cheryl reported the 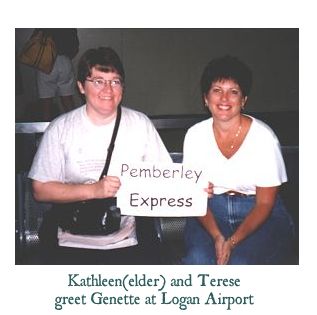 general experience of seeing "cloud, cloud, cloud, ground" during the landing. Myretta made three trips to the airport the night before the meeting. The last plane to land that night carried Amy, Hil and Janet and actually landed on instruments after the airport had been officially closed. 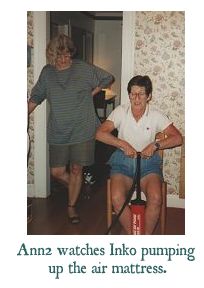 Her two bedroom condo had two people asleep in each room(except the bathroom). Fortunately there were double beds everywhere but the kitchen. But a borrowed air matress did the trick.

Cheryl, unable to determine who, exactly, was where, referred to the "couch people" in Myretta's living room.

Erin and Laraine were to meet in the afternoon and drive down together. Erin's flight did not land until late at night and, not being able to find Laraine, she rented a car and made her way to Craigville on her own. She arrived, much to everone's relief, around midnight on Friday. Everyone fretted about Laraine until she appeared on Saturday morning. Her plane had been forced to land in Albany. Her seatmate, a good samaritan 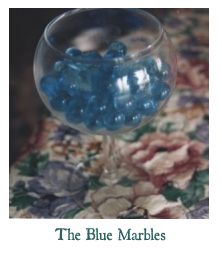 from Boston, drove her from Albany to Boston and put her up on her couch overnight. There was great joy on her arrival.

Friday arrivals began about noon and continued through the evening. Early arrivals found some extraordinary things. As we were unpacking and setting up, someone discovered, among the bric-a-brac in the Lodge dining area, a wine glass full of blue marbles. We shared a collective shiver and agreed that we were, indeed, in the right place. Later, as you will see, all the attending Blue Marbles had a picture taken with the artifact. 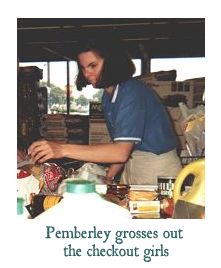 There was great admiration for Marisa, who, on learning that there was a room available, dumped her husband and mother and took the next train to Boston.

Amy, Hil and PB Lynn went out for groceries and came back with a trunk full of "women food": chips, salsa, cheese and crackers, M&Ms and assorted munchies. They also brought back some of the necessities of life such as coffee, cups and artificial sweetener, anything that would be needed to make the days start well and run smoothly. 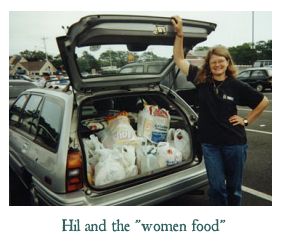 Apparently, the checkout girls at the local supermarket were appalled with the haul and did not scruple to show their opinion. Undaunted, the ladies of Pemberley returned with a haul that was consumed happily during the rest of the weekend. The only miscalculation was over the amount of coffee we can consume over a two day period, but the second trip was not as traumatic for the employees of Star Market. 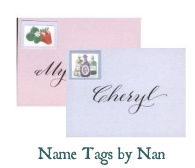 As the rest of the participants arrived, they were given name tags, sheets and towels and shown to their rooms. The name tags were Nan's gift to the conference. She had hand lettered each tag as well as a second tag to identify the rooms and added a Pemberley board logo to each tag.

As Ann2, Inko and Kathleen(Elder) explored "The Oxofrd Room", they discovered shelves in the closet. "Happy thought indeed."